A visitor sent us a couple of nice records for the island during their recent visit, a poppy and a butterfly.  One new and one rarely reported - Well done Tom Garner and thanks for some lovely photo's of them.

Small Pearl Bordered Fritillary, seen on the slopes of Beinn Bheiger often reported on Jura but rarely seen on Islay. 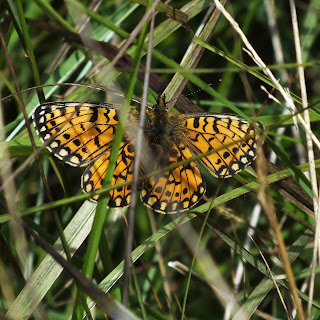 Yellow horned Poppy found on a beach near Laggan Point.

Malcolm commented: "Yellow Horned-poppy is new to the vice-county (Islay, Jura, Colonsay), which is always nice to achieve.  There are records from Mull and Kintyre, so its appearance here is not entirely unexpected, though as it happens the most recent of those records is as long ago as 2001. I also think it goes to show the value of walking relatively ignored stretches of our coastline."

There is a tremendous growth of strandline plants at the minute, Kilnaughton Beach has a prolific spread of Sea Rocket I saw when last down there for a mini-wildlife adventure family activity.