Seals, hermits and a little fishy

Killinallan is always a great place for sea creatures and it did not disappoint last Thursday despite a bit of rain. 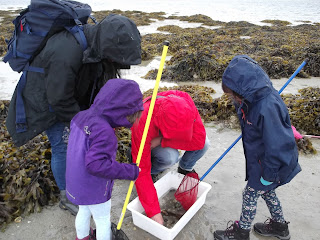 Under every patch of seaweed there were crabs, many were soft shelled having just molted, developing a new jacket after shedding their last ha
rd shell and were hiding waiting for it to harden up and once more protect them from predators.

If a sea snail shell was not inhabited by a sea snail (periwinkles mainly) it was now home to a hermit crab, they came in all sizes from the most 'diddy' to the largest periwinkle shell there was.  Some were of the species which cultures a growth over the shell to help camouflage it in.

Opossum shrimps were plentiful hanging in the lea of floating weed with sand shrimps darting about over the sand.

The best of the day was a small pipe fish (related to the seahorses).

We brought some of our finds (hermit crabs and small shore crabs) back to the Nature Centre in Port Charlotte to join others in our tanks.  There are so many fascinating little beasties exhibiting lots of natural behaviour, it is a great place to bring the children and watch what goes on under the sea!
Posted by Islay Natural History Trust at 16:41