Here's a photo of one of five tiny but beautiful scintillating sea creatures that a family brought into us here in the Nature Centre - a quick search through the library and a trawl of the internet identified them as Sea Gooseberries (Pleurobrachia pileus), described as a "solid ovoid, to 20 mm long, with plumed fishing tentacles up to 140 mm long". Of the 5 in the bottle, three had these tentacles which they use to catch food. They were found on The Strand where apparently quite a large number were in the sea there, and according to the book they're especially abundant in the summer. Thanks to the family for bringing them in, it's been great to show them to other visitors before releasing them back into the sea! :-) 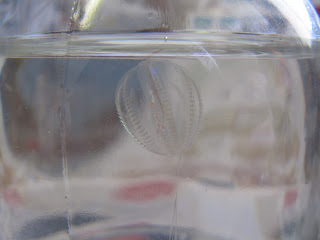