The forecast wasn't promising on Sunday 5th July but the rains stayed away and our group of 11 had a great walk around Kilchiaran Bay. The tide was very low - and so we got a rare opportunity to scramble and paddle round to explore the cave on the left-hand side of the bay - where the 'billion-year gap' is well exposed. 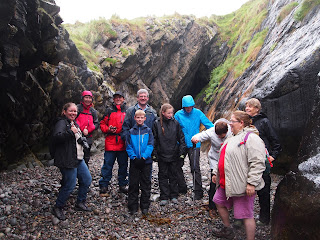 The rocks on the right are 1.8 billion-year old gneisses of the Rhinns Complex in sheared contact with metasandstones of the Colonsay Group on the left which are probably a billion-years younger. We discussed the formation and break-up of ancient continents (Columbia/Nuna and Rodinia), deltaic sedimentation, slate formation, quartz veining, the opening and closing of the Iapetus ocean, 200 million-year old Mesozoic faulting, Cenozoic dyke intrusions related to the opening of the Atlantic Ocean about 55 million years ago, as well as much more recent Ice Age features such as ice-scratched rocks, glaciomarine gravels and the flint pebbles they contain which were so important to Mesolithic hunter-gatherers. All this in one bay!
Dave Webster