Polytrichum commune is a widespread and abundant moss with its short, bright green tufts of leaves. The spore capsules are borne on long stalks several centimetres in length and are four-sided with a yellowish cap on the end when young. Rather few mosses have vernacular names, but this one has several, including Hair Cap Moss, Common Haircap Moss, Common Hair Moss, and Great Goldilocks. Take your pick!
Malcolm 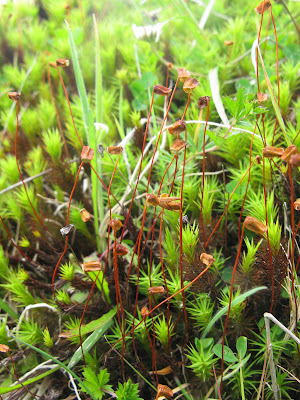