Once more thanks to Steve and Yvonne for this photo of fungus growing at Ardnave. Now I'm really going to impress you:
This is Psathyrella ammophila
Even more impressive - this species is saprotrophic on the roots of marram grass. Basically this means as matter decomposes within the marram grass, the fungus breaks the matter down into proteins, lipids and starch. Apparently it's a bit like an iceberg - a lot of the stem is buried beneath the sand, presumably obtaining nutrients from the marram grass.
I'd like to take credit for this information so you can remain impressed, but in reality the experts at Wild About Britain identified the fungus for me and Wikipedia provided more information. Interesting though, don't you think?
Becky 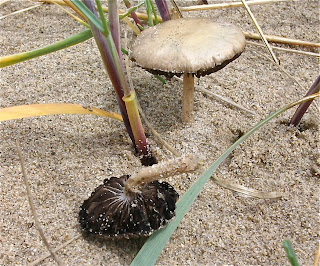