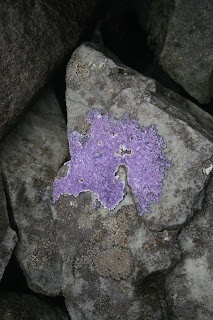 Some years ago I climbed one of the Paps of Jura and took a photo of this lichen. Since then I have been trying to find out its identity, without any success. I thought I'd ask the lichenologists this week and get a quick answer, but no; apparently it's been the subject of some debate over at Port Charlotte youth hostel. There is no definitive answer; some say its purplish hue is caused by birds digesting and subsequently excreting bilberry juice! But others think the rain would have washed the 'dye' away and the purple stone has been seen this week by a lichenologist. 7 or 8 months (since bilberry season) is a long time for the dye to remain. So the problem remains and has apparently also been the subject of debate on lichen forums for some time. Watch this space for any further developments. . .
Becky
Posted by Islay Natural History Trust at 19:12