Two Silver Y moths were fluttering at the kitchen window last night. The weather outside wasn't very nice so one can understand their desire to come indoors! This is a migrant which reaches Britain from the continent every summer but in hugely varying numbers. I've seen or trapped less than half a dozen this year, all in the last few weeks, and had none at all in 2011, but in both 2009 and 2010, I was catching six or seven a night in June, and then a few singles in September. The greatest recent invasion was in 1996 when there were coastal swarms in parts of Britain, as far north as Shetland, estimated to contain millions!
I haven't managed to get a reasonable photograph, so here's one from Butterfly Conservation. As you can see, the name identifies the moth, unlike some!
Malcolm 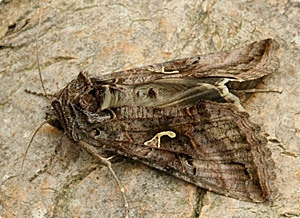