Since the severe storms in early January there has been an exceptional influx into the NW of the UK of “white-winged gulls”. Early estimates for Argyll suggested 96 Iceland and 36 Glaucous Gulls plus a scattering of Kumlien’s race of Iceland Gull. Later assessments have increased the likely figure to 139 Iceland Gulls (including 8 Kumliens type) and 50 Glaucous Gulls. Reports of national numbers suggest a conservative figure of 600 Iceland Gulls and 180 Glaucous Gulls – mostly in the NW of UK, especially Scotland. But these are early days, and if anyone manages to collate final UK data this figure may be much higher. There have also been unprecedented numbers of both species straying far to the south into Iberia and the Canary Islands (see http://www.rarebirdspain.net/arbsr000.htm#Largla).

Apart from many individual and random sightings from resident birders on Islay, there were more concerted efforts to census numbers of both species from experienced and reliable birders visiting the island at the time – particularly Ken Shaw on 15th. This has resulted in a mass of records starting in the first week of January, peaking in the middle two weeks of January and with further sightings of possibly additional birds at new locations for both species right up to the end of the month.

I have tabulated all sightings I am currently aware of for Islay and tried to analyse the data. Assuming ages of individuals were correctly assessed, (where known or given) and by matching these with time and location of the sighting I’ve arrived at likely minimum and  maximum figures for each species. These figures are certainly not definitive, but the best I can come up with given the data available. I would welcome your own interpretation of the data and any additional sightings to make the picture more complete.

At the peak of activity, individual birds were often quite “faithful” to specific locations (including inland fields as well as coastal sites) over several days or more, which makes assessing true numbers a little easier. Known simultaneous sightings were also taken into account in the assessment. In the table, sightings within heavily bordered boxes could possibly relate to the same birds. Sightings outside of boxes are either certain or very likely to be different birds based on the various factors mentioned above. Imm = immature, exact age unspecified; 1W = first winter; 2W = second winter; 3W = third winter; Ad = adult; ? = age unspecified, but the inference being that these were immature.

ICELAND GULLS
An early report via Jim Dickson and others collating Argyll records, gave a more or less simultaneous count/census from a reliable observer (Ken Shaw on 15th January) of 26 birds: 7 Adults; 17 1W; 2 2W). This survey did not cover the whole island and in particular missed the southern end of the Rhinns and the area from Port Ellen to Claggain Bay and beyond. Earlier and subsequent more random sightings and short censuses in particular areas are added to give the full range of sightings shown in the table. According to my calculations, this gives a minimum count of 39 Iceland Gulls: 7 Adult and 32 Imm. (any age from 1W – 3W or age unknown). Determining a likely maximum figure is more difficult as it is impossible to know which birds are the same individuals in different locations. The table suggests a maximum of c.42 immature birds which would push the total to 49 Iceland Gulls maximum –all ages included. How many there truly were we will never know.

GLAUCOUS GULLS
The table gives a minimum count of 25 Glaucous Gulls: 7 Adult & 18 Imm. (any age from 1W – 3W or age unknown). If all sightings were of different birds and all ages correctly assessed, then there is a possible maximum of 36 individuals including 8 Adults.

JURA
A day on Jura on 27 January produced single additional records of both Iceland and Glaucous Gull referred to in the table. 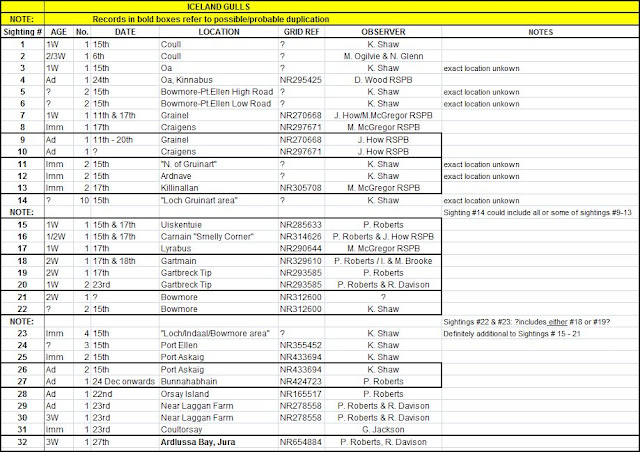 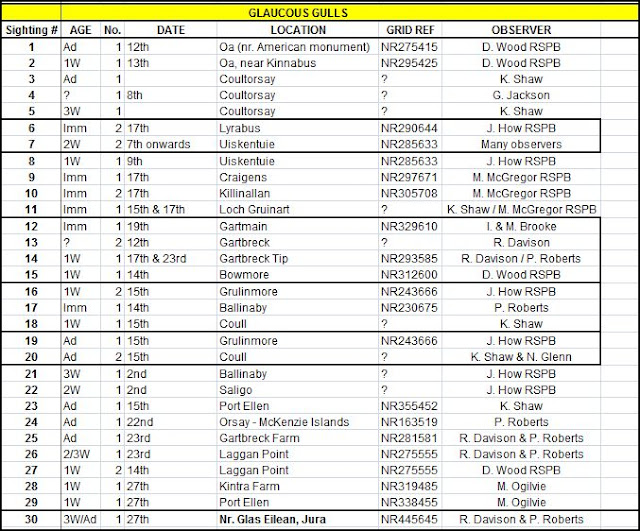 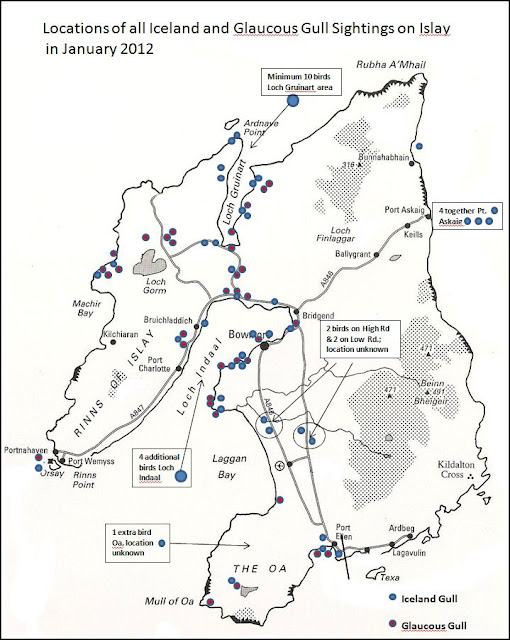 FOOTNOTE: Writing this on 1st February, it appears that the numbers of white-winged gulls are decreasing and birds dissipating? Most annoying is that during the whole month I never managed to add either species to my “garden list” as I peered from my house across Loch Indaal !