IN SEARCH OF SNOWBALL EARTH 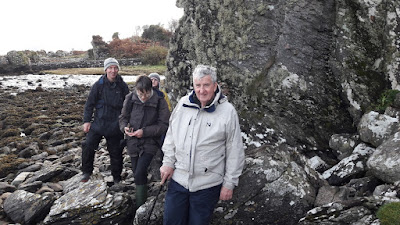 The author of this piece is not a geologist but is fascinated by the story of the Earth told by looking at its rocks. Geologists should read no further but should consult "A Guide to the Geology of Islay " (published by Ringwood Publishing) by David Webster, Roger Anderton and Alasdair Skelton, all skilled and experienced geologists with a special knowledge of Islay.

About 650 million years ago, the evidence of the rocks indicates that the whole or most of the Earth was encrusted with ice. Exposed rocks of that age in various parts of the world offer the evidence. One of those places is Islay the southernmost Scottish island facing the Atlantic Ocean.

If you go to Islay by boat you may arrive at the harbour of Port Askaig, directly opposite the southern end of the island of Jura. When you leave the boat, park your car for a while in the car park and look upwards at the cliff facing you. In that cliff is to be found evidence for “Snowball Earth”.

If you walk over to the cliff and look carefully at the rocks in it, you will find the evidence. These rocks are not volcanic. They are not lava or granitic. They have no structure. Rocks which have been laid down over a long period on the surface normally have done so in successive layers or beds. Often the beds can be readily seen. If the rocks have spent long periods buried under the surface of the Earth, they will have been exposed to heat and pressure which will have altered the minerals which compose them. Often the pressure, which may result from continental plate movement, will have resulted in the minerals arranging themselves in lines at right angles to the pressure. When these rocks ultimately return to being exposed on the surface, you can see these lines. Geologists call this phenomenon "cleavage". 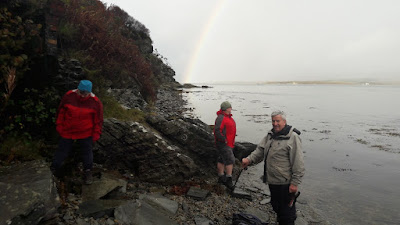 The rocks on the Port Askaig cliff have no visible bedding or cleavage. Geologists can see that this is typical of the detritus left by the movement of glaciers which have melted leaving behind the detritus which they have accumulated. If the glacier has left the land to float on the sea surface, this detritus will be ultimately be deposited on the sea bed.

Geologists also discover the age of many ancient rocks by measuring the radioactivity in certain component minerals. The age of the Port Askaig rocks is about 650 million years.

Geologists can also learn the approximate position of rocks when they appeared on the surface of the earth. One way of doing this is by measuring the alignment of crystals in the rocks relative to the magnetism of the earth. Such studies have led geologists to conclude that about 650 million years ago Scotland was not far from the South Pole. By continental plate movement, Scotland has proceeded northwards to its present location over that unimaginably immense period of time. At that time England was located on another distant continent They were not to be united until more than 200 million years had passed.

If you examine the cliff carefully you will see that it contains red stones of different sizes. These stones are red granite. There is no red granite in or near Islay, so the stones have come from somewhere else. 650 million years ago, Scotland was physically nearer Scandinavia than it is now. Some believe that these red granite boulders and pebbles could have come from there.

This glacially deposited rock has come to be known as the Port Askaig Tillite. There are other exposures of it in Islay, mainly exposed at or near the seashore on the east coast. At a shoreline burn mouth about a mile south of Port Askaig,  the tillite has been eroded by the sea. Pebbles from it are lying on the stone beach and can be picked up and examined.

The rock type which underlies central Islay is limestone which is older than the Port Askaig Tillite. It can easily be seen on the surface because of the lush vegetation which the calcareous soil produces.

The neighbouring quartzite rock produces thin unfertile soil and vegetation. The sharp division between the rock types is readily seen by the contrast between the green grass of the limestone vegetation and the brown moor and heather of the quartzite vegetation.

This ancient limestone is exposed in the hills near Loch Lossit. As the exposed rock becomes younger, it alters gradually to tillite. The lower or earlier part of the tillite contains fragments of limestone likely to come from the local limestone bed rock. This can be compared with the red granite rocks in the older part of the tillite found at Port Askaig.

You can also see the rock formations which immediately followed the glaciation. Good exposures are found at the shoreline between the Caol Isla and Bunnahabhain distilleries. These formations also comprise limestone. After a long period of glaciation, water which has been trapped on land by the ice is released into the sea, causing sea levels to rise. In turn this causes deposits on the seabed of material which includes calcium carbonate, and becomes limestone over long periods of time.

A feature of these rock formations is Stromatolite Fossils. Stromatolites are a primitive form of bacterial life which live on carbon dioxide, water and sunlight. They discharge oxygen as a waste product.  Their large numbers caused large scale discharge of oxygen to Earth’s atmosphere when it was oxygen poor, and allowed the development of more sophisticated forms of life which required oxygen, and ultimately to human beings. Stromatolite fossils are readily found in the shore rocks south of the Bunnahabhain distillery. They may have relevance to the current search for life elsewhere in the solar system.

Grateful thanks to David Webster for two days of fascinating onsite education in the lively autumn weather of Islay.