18 brave souls turned out on a dreich afternoon to learn more about the wide range of geological features exposed at the bay. However, the rain wasn't as heavy as we had first feared and the dunes gave us some shelter from the strengthening SE wind.

There's so much to see in a small area - from Silurian-age (440 million year old) igneous rocks (a biotite-diorite stock) intruded into 700 million-year old turbiditic metasandstones and metamudstones themselves folded 470 million years ago in the Caledonian mountain building (orogenic) event. And for good measure, a 60 million-year old 10m thick gabbroic dyke with chilled and baked margins evidencing the initiation of the opening of the North Atlantic ocean.

Hunting for flint glacial erratices was very sucesful now that all that horrible sandy stuff has been washed away exposing all the wonderful rocks! The highlight for some folk was the audience-participation bit where Dave had 'volunteers' strung out across the beach in a time-line from the big bang to the stone age. 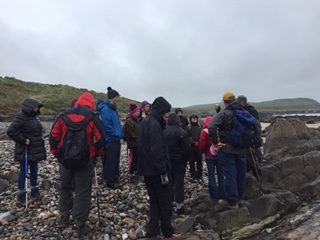 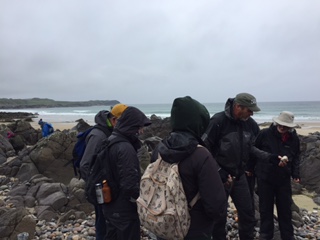