It wasn't just a new moth for Islay which Mark, Sally and I looked at in the Killinallan Dunes the day before yesterday, but the Narrow-leaved Marsh Orchid Dactylorhiza traunsteinerioides which is new for Islay (indeed, new for the vice-county). Mark and Sally had found it earlier and were pretty certain that this was what it was, but it needed confirmation so I went back with them and then sent photographs to an orchid expert, who was more than happy to say that the identification was correct. It grows on Mull, Tiree and Kintyre, so Islay fills a gap between them, and in a handful of sites in north-west Scotland, as well as up to 40 mostly coastal sites in England and Wales.
At Killinallan, there were a few tens of plants scattered thinly over quite a wide area of the flatter ground and in one wetter dune slack. It is the eleventh species of orchid found in this one area of the island: Pyramidal, Frog, Early Marsh, Northern Marsh, Fragrant, Marsh Helleborine, Early Purple, Common Spotted, Heath Spotted and Common Twayblade. Well done, Mark and Sally! 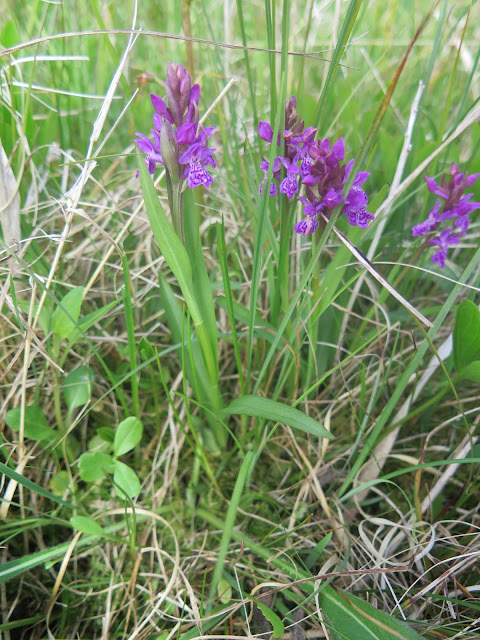