Brent Geese on the move

The last couple of days have seen a flock of Brent Geese (76 on 28th and 87 on 29th) feeding on green algae in front of Gortan School, just along the road from Bruichladdich. Peter Roberts managed to read five colour rings the first day, and I added a couple more the next day.
The photograph shows one with a 3 engraved on a blue ring, while another has an X on a blue ring. The other leg of both birds also carried a ring, and with this information, we have now been told where they were originally ringed.
Blue 3 was caught at Sandyford, just outside Dublin, Ireland, on 2nd February 2012. It was last seen in the Dublin area on 8th April 2012 and turned up again on 8th October. It stayed there throughout this last winter, being last seen on 24th April, just four days before it was seen here on Islay.
Blue X was caught in Co. Wicklow, Ireland, south of Dublin, on 8th February 2012. It paid a quick visit to Dublin in February and then was back on the Wicklow coast until 22nd April 2012. It was seen at Dublin on 22nd November 2012 and either there or Wicklow until 3rd March.
We've had colour-ringed Brent, which winter in Ireland, passing through here in past springs. It always surprises me that these birds, which are setting off on a journey of 4000–5000 km (c.2500–3000 miles) to breed on islands in the Canadian Arctic, should stop after covering no more than the first 250 km (175 miles)!
Malcolm 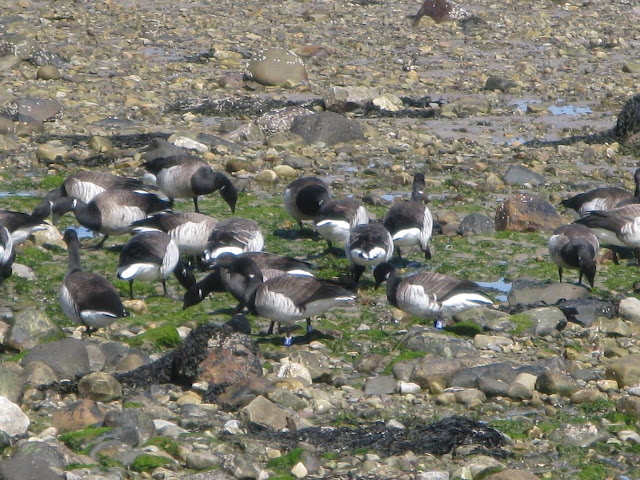