I ran my moth trap in my garden last night, catching a modest 14 of 5 species. I haven't run it many times yet this year because it's been so cold at night. and even last night there was a very heavy dew, indicating the temperature had dropped considerably. Still, it was a better catch than a week ago when I caught just 3 moths of 3 species. The names of moths are almost as attractive as the moths themselves. Last night I caught White Ermine, Heart and Dart, Marbled Coronet, Pebble Prominent and Emperor (photo of this last attached - though not the one I caught as it wouldn't sit still enough.
And for those who hoped the hard winter would have done for the midges - I caught lots and lots!
Malcolm 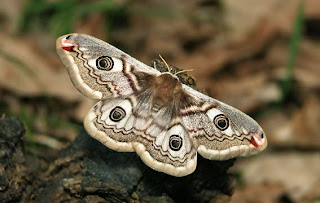