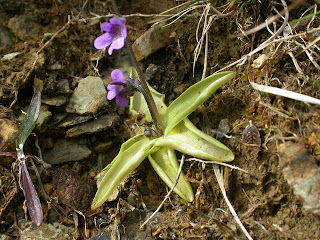 We found our first flowering examples of Pinguicula vulgaris, the common butterwort north of Bunnahabhain this afternoon. These rather weird looking plants live in poor acidic soils and so supplement their meagre diets by trapping small insects and digesting them.

Wikipedia says "In order to catch and digest insects, the leaf of a butterwort uses two specialized glands which are scattered across the leaf surface One is termed a peduncular gland, and consists of a few secretory cells on top of a single stalk cell. These cells produce a mucilagenous secretion which forms visible droplets across the leaf surface. This wet appearance probably helps lure prey in search of water (a similar phenomena is observed in the sundews). The droplets secrete only limited enzymes and serve mainly to entrap insects. On contact with an insect, the peduncular glands release additional mucilage from special reservoir cells located at the base of their stalks. The insect will begin to struggle, triggering more glands and encasing itself in mucilage.
"The second type of gland found on butterwort leaves are sessile glands which lie flat on the leaf surface. Once the prey is entraped by the peduncular glands and digestion begins, the initial flow of nitrogen triggers enzyme release by the sessile glands. These enzymes, which include amylase, esterase, phosphatase, protease, and ribonuclease break down the digestible components of the insect body. These fluids are then absorbed back into the leaf surface through cuticular holes, leaving only the chitin exoskeleton of the larger insects on the leaf surface.

"The holes in the cuticle which allow for this digestive mechanism also pose a challenge for the plant, since they serve as breaks in the cuticle (waxy layer) that protects the plant from desiccation. As a result, most butterworts live in humid environments.


"Butterworts are usually only able to trap small insects and those with large wing surfaces. They can also digest pollen which lands on their leaf surface. The secretory system can only function a single time, so that a particular area of the leaf surface can only be used to digest insects once."
Posted by Islay Natural History Trust at 21:48