We at the Islay Natural History Trust had an amazing weekend (8th & 9th April) learning about the seaweeds on the shore.  I am so glad we finally managed to arrange this and discovered the expertise not so far away on Easedale with Duncan (Slate Island Seaweeds Ltd).  Two seaweed workshops over last weekend attracted 31 participants all eager to discover what bounty the seashore could provide.  We learned that there was more to seaweeds than meets the eye, not just a slimy mass of algae that when past it's best creates 'stinky corners'!

Foraged fresh and sustainably and with the right know-how in how to cook it, it is a wonder to the pallet.  There are the green seaweeds, similar to terrestrial plants, the reds, mid to low shore, a whole host of tender edible varieties and the brown seaweeds a group all themselves and none of them perilous to eat unlike fungi. So we were treated to alfresco cooking in the lovely weather, on the beach at Sanaigmore and in the Youth Hostel garden in . 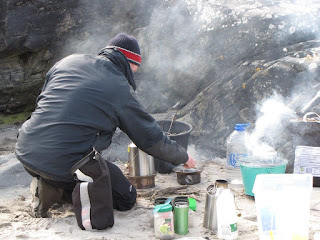 ﻿
Purple Laver grows in profusion on many of our shores coating rocks in a shiny black film.  This is the basis for laverbread and the noki used in sushi, but dried and baked in the oven makes amazing crisps, far better than potato crisps and so much healthier!  Pepper Dulse has an amazing flavour, though not according to my daughter! Although our younger participants on the Sunday were first in the queue trying all the flavours that were presented to them.

﻿
﻿Traditional Carageen pudding went down very well, and Carageen was used as a thickening agent for egg-less pancakes.  ﻿
﻿    Dulse on cooking tastes like ham and Oar-weed (kelp) provided us with a fantastic tagliatelle alternative.  There were even a good number of adventurous folk prepared to sample cooked limpets off the BBQ.  We also used some of the terrestrial 'weeds' in our recipes including wild garlic and hawthorn leaves.


﻿So hopefully it has inspired many of us to consider being a little more adventurous in our cooking, it certainly has for me, I came home and cooked nettle soup for my tea.
Saturday foraging crowd: 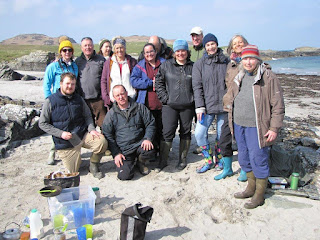 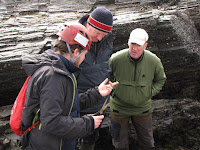 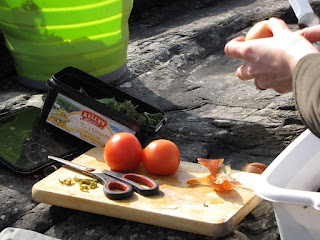 Considering the interest and enthusiasm of all who took part I am sure we will introduce some of these teachings into our Sunday nature walks over the summer and organise more workshops in the future.