The rain stayed away until 4 and the tide was very low - a great opportunity to get into the 'billion year gap' at Kilchiaran Bay.
12 intrepid explorers engaged in a spot of coasteering to scramble into the cave on the left-hand side of the bay where the sea has eroded a gully along the 'Kilchiaran Shear Zone'. This fault zone separates the 1,800 million-year old pink gneisses and green metabasites of the Rhinns Complex from the younger (probably c. 800 million-year old) laminated metasiltstones, slates and cream coloured metasandstones of the Colonsay Group.
The group also had a good look at some striated ice-sculpted bedrock dating back only about 25,000 years to the last Ice Age when Islay was covered in about 500m of ice and pebbly sands with flints deposited when the ice finally melted about 15,000 years ago.
The group were excellent Mesolithic flint beach-pebble hunters and gamely enjoyed more role playing as Dave had them lined up in a time-line across the beach with various 'volunteers' playing the parts of the 'big bang', cyanobacterial green slime, dinosaurs and stone-age man along with the various rocks of Islay. 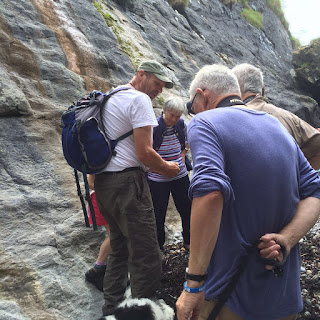 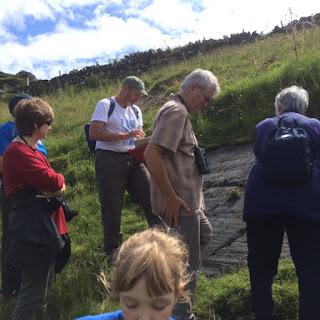 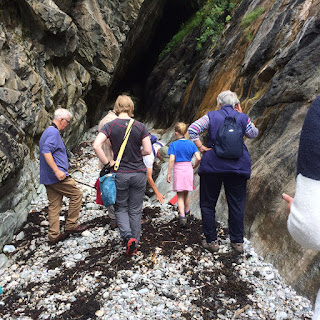 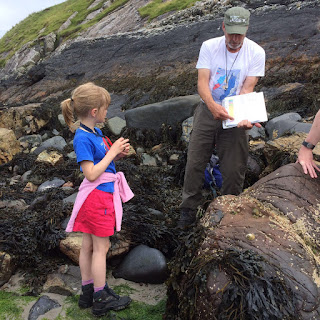 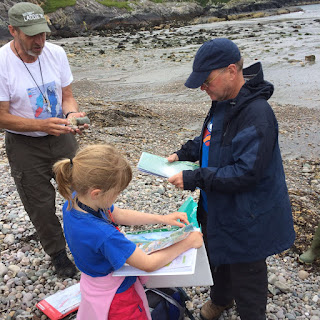