15 people joined us on Dave's geology walk at Saligo on Sunday, which turned out to be a fascinating and informative afternoon. Dave started off by a quick resume of basic geology including the 3 categories of rock - igneous (has cooled from molten rock), sedimentary (formed in layers) and metamorphic (changed from one form to another) - which in itself was a good start for a novice like me! We then headed down onto the beach for a closer look at the amazing rocks down there.

The rocks here were turbiditic sandstones deposited by turbidity currents in deep water, and Dave reminded us of the school experiment we might have done, filling a jam jar with water, mud and rocks, shaking it up and letting it settle. The bigger bits sink to the bottom and the fine mud setlles out slower - leaving a deposit that 'fines upward'. 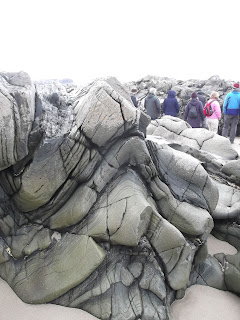 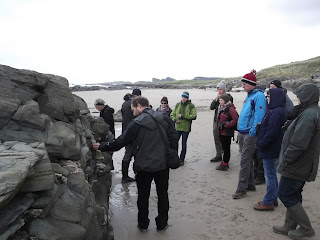 Many thanks to Dave for a fascinating talk/walk, and to all those who came along!