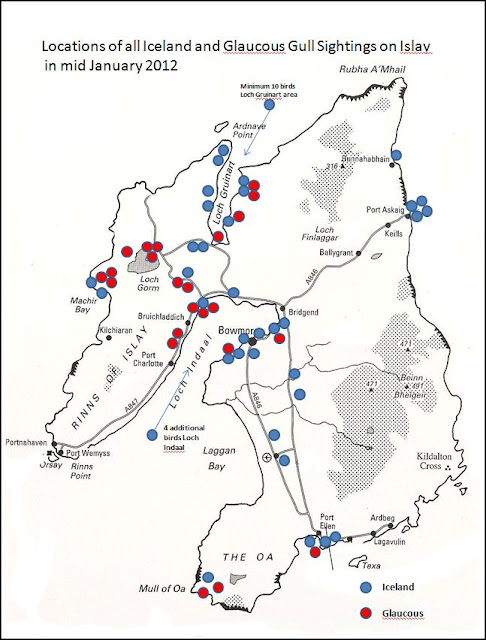 Iceland Gull And Glaucous Gull Sightings On Islay In January 2012
Since the severe storms in early January there has been an exceptional influx into the NW of the UK of “white-winged gulls”. Early estimates for Argyll suggest 96 Iceland and 36 Glaucous Gulls plus a scattering of Kumlien’s race of Iceland. Reports of national numbers suggest a conservative figure of 600 Iceland Gulls and 180 Glaucous Gulls – mostly in the NW of UK, especially Scotland. But these are early days, and if anyone manages to collate final UK data this figure may be much higher.
Apart from many individual and random sightings from observers resident on Islay, there were more concerted efforts to census numbers of both species from experienced and reliable birders visiting the island at the time. This has resulted in a mass of records over the middle two weeks of January.
Birds have generally been “faithful” to location and seen in the same sites (including inland fields as well as coastal sites) over several days or more.
The (data suggests) a minimum count of 31 Iceland Gulls (with) a possible maximum count of 45 individuals, though some records are quite likely to be of birds moving from one location to another. However there could well be 35-40 birds involved?
The (data suggests) a minimum count of 17 Glaucous Gulls (with) a possible maximum of 23 individuals is possible if all sightings were of different birds – though this figure seems unlikely.