A wonderful walk a couple of weeks ago on the western shores of Loch Gruinart in bright sunshine with lots of geese and the grand finale was an otter running up the sand towards me!
Becky 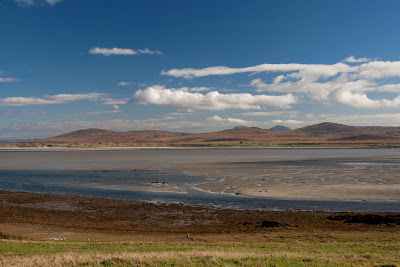 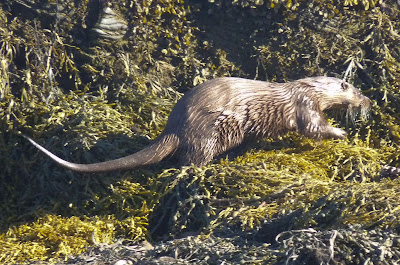 Posted by Islay Natural History Trust at 19:34 No comments:


120 Barnacle geese were captured this morning on the RSPB nature reserve up at Loch Gruinart. using a cannon net. The geese feed and roost in huge flocks and it is possible, but by no means easy, to lure them within range of the net by baiting the ground with corn.


Once caught, various measurements are taken, and three rings placed on the legs. One is a red 'locality ring' which can easily be seen with binoculars and shows that the bird was caught in a particular location (it might be a red ring for Gruinart, but a blue ring for Bowmore for example). There is also a white 'Darvic Ring' which can be read, with luck and skill, while using a telescope, and then there is the standard metal BTO ring which can only be read by recapturing the bird, or finding it dead. So each bird captured is eventually released adorned with a fair amount of leg ornament.


The feeding behaviour patterns, population structure and breeding success of these Barnacle geese is of increasing interest to Islay's farmers, who are compensated by the Scottish Government for the very significant damage they do to grazing on the island which would otherwise be available to livestock. The existence of the flocks also means that farmers delay the seeding of the barley fields that are 'growing for Bruichladdich'. In recent years, in common with all areas of public expenditure, the budget available for this compensation has been cut. Some of islay's farmers are now calling for a cull to reduce the numbers.


The cannon netting is co-ordinated by Dr Steve Percival who, with his wife Tracey, has been coming to Islay to study the flocks of wintering geese for many years.
Posted by Islay Natural History Trust at 21:58 No comments:

Posted by Islay Natural History Trust at 18:55 No comments:

In February 2011, we posted a photograph like the one here and debated whether it was a slime mould or some abandoned frog spawn. Three patches like the one shown here were a few feet apart on a path through a field at Foreland a couple of days ago. A close look shows not just the patches of white jelly but also clumps of tiny black spheres. Had this been early spring, I would have again suggested frog spawn from a frog that had come to grief or had, for some reason, had to lay its spawn out of water. But this is October and so not frog spawning time. For once, the internet doesn't seem to be a lot of help with some saying this kind of thing, including with the tiny black spheres, is a slime mould, called star rot, and others saying, regardless of date, that it is frog spawn. What does anyone think?
Malcolm 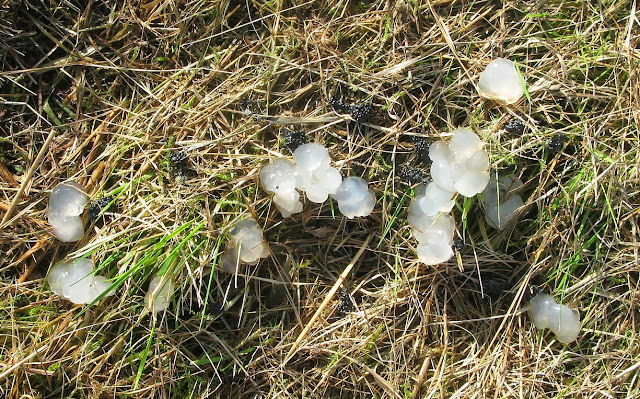 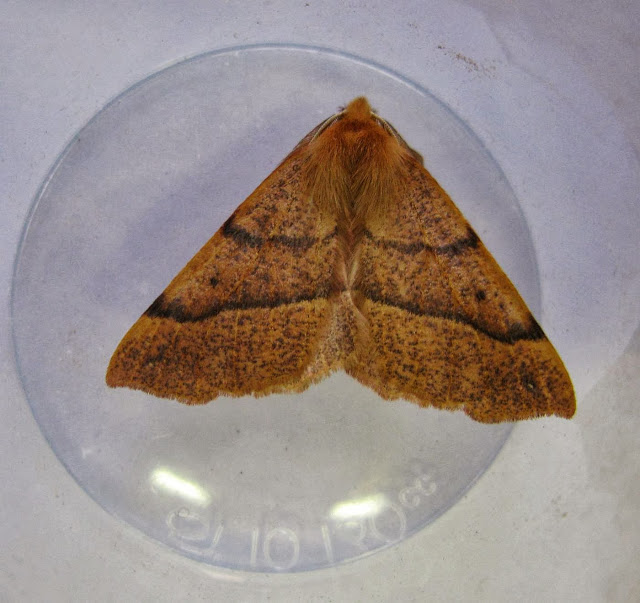 On 16th October 2010, I caught this attractive moth in my garden, and it turned out to be only the fourth record for Islay. This morning (16th October 2013), I found I had caught another - Islay's fifth record. It is one of the late flying moths, from mid-September to early December. Some moth names are difficult to understand, but this one is easier as it has feathered antennae (difficult to see in the photograph), while hawthorn and blackthorn are among its larval foodplants. The circle in the photograph is the base of the plastic tube into which I put the moth to take its picture. It is 40mm across (or just over an inch and a half), so it is quite a large insect.
Malcolm
Posted by Islay Natural History Trust at 08:02 No comments:

Posted by Islay Natural History Trust at 14:49 No comments:

More photos from the wild west side


Posted by Islay Natural History Trust at 11:14 No comments:

A walk on the wild side

A great walk with lots of things to look at - both little and large, both manmade and natural, both old and young.
Becky


Posted by Islay Natural History Trust at 11:29 No comments:

The sun rises over Islay's eastern hills at 7.30 am this morning (Oct 1st).
Malcolm 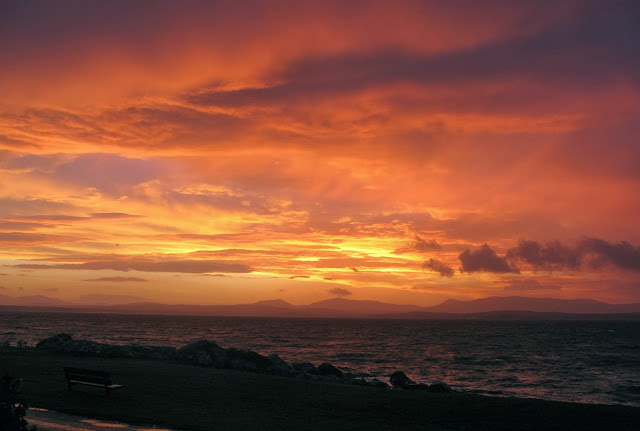